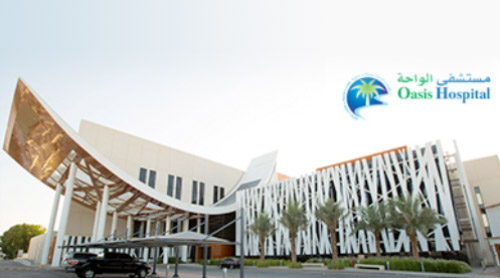 Oasis Hospital was founded in 1960 by the family of Dr. Pat and Marian Kennedy, dedicated Christian missionaries who were brought to Al Ain under the visionary leadership of the late Sheikh Zayed Bin Sultan Al Nahayan. Since that time, OASIS HOSPITAL has been the cornerstone of health care in the Eastern Region of the Emirate of Abu Dhabi and holds a unique bond of trust with the peoples of this region. Emphasizing the care of women, children and families, Oasis Hospital has earned its motto of “Birthplace of Leaders for the Nation”, providing world class medicine coupled with an empathetic pathos. Under the management of CURE International, Oasis Hospital is an integral part of the worldwide network of CURE healthcare facilities dedicated to better health for families around the globe.

Oasis Hospital is moving to a new facility built with a grant from the president of the UAE, His Highness Sheikh Khalifa bin Zayed al Nahayan, the expansion will expand Oasis ability to care for community from 35 beds to 120 beds. As part of moving to the new hospital facility, Oasis turned its attention to its desktop infrastructure.

They decided to embark on VDI initiative with VMware Horizon View. They faced new set of challenges here. “Our major challenge is desktop consistency. The heterogenous environment does not only affect user experience and support, but creates real challenges applying a robust security and mobility platform,” said Trevor Bunch, Chief Information Officer. Oasis IT needs to ensure that the virtual desktops and thin clients are managed in compliance to the patient privacy guidelines and make it available to doctors from anywhere on any device, including mobile device.

Another opportunity was to have VDI and application servers on the same infrastructure. Over 98 percent of their applications are virtualized and are on a traditional three layer architectures made up of servers, storage and networking. “As we looked at the quality of service for a VDI solution, we became convinced that our application infrastructure would perform much better on a hyper-converged, web-scaled infrastructure and give us a consistent expansion option in the future,” said Pradeep Bhaskaran, Deputy Chief Information officer for Oasis Hospital.

After making a list of all industry players who offered VDI solutions, Oasis team began evaluating them based on key criteria such as performance, scalability, complexity, cost, high-availability and storage performance. Most vendors offered traditional three layer architectures made up of servers, storage and networking with heavy IO for VDI, increasing the cost and complexity. Of all of the companies, only Fujisoft offered each of the features and performance standards Oasis team wanted, and it did so at a lower cost and with less complexity than its competitors.

After evaluating a number of vendors and types of solutions, Oasis decided to deploy the Fujisoft solution for VDI. VDI solution proposed by Fujisoft is a combination of technologies including VMware Horizon View desktop virtualization, and quick sign-on on Nutanix converged infrastructure. Oasis initially deployed 150 View desktops for IT, administrative and clinical staffs.

Along with the view rollout, Oasis also began replacing its existing desktops with Wyse zero clients and were deployed in each patient exam room and nurse’s station. Quick sign-on allows users to use their hospital identification badge to log into their workstation without entering their user ID and allows them to access the Oasis Hospital single sign-on solution to access all applications they are authorized to use. The solution context awareness feature helped clinicians to move from one workstations to workstation and quickly pick up wherever left off in any desktop application, without having to go through the log-on process and profile loading again.

Location awareness makes the workstation understand where the nearest printer is in the building and routes print jobs to it. To optimize the performance and availability of it Horizon View Desktops, Oasis paid specific attention to its Infrastructure. The Nutanix Virtual Computing Platform is SAN-free and provides a single point of management for server and storage resources, whereas the traditional systems are more complex to manage. The Nutanix converged compute and storage architecture is easy to manage and easily scales by adding nodes to the cluster. It delivers exceptionally high IOPS that satisfy even the workload spikes of VDI during boot storms, login storms, anti-virus scans, etc.

When Oasis implemented VDI on VMware Horizon View and Nutanix, they also migrated 100 application servers on to Nutanix. This helped them to reduce the physical server count form 30 to 8 machines. This improved datacenter manageability and reduced power and cooling costs.

Implementing View on Nutanix helped Oasis to linearly scale their virtual desktop environment from tens to hundreds of desktops, while maintaining excellent user experience, reducing product risk and easing budget pressures, with a pay-as-you grow model. Security is enhanced as well, as the data no longer resides on local PC drives. Now Oasis users can seamlessly connect to their View desktops from any location within the hospital, using any device.

This is useful not only for Oasis IT and administrative staff, but also for its physicians; their desktops follow them as they move from evaluating patients in outpatient clinics to rounding in the inpatient wards within seconds. “Our staff noticed the desktop performance improvements instantly. We could move seamlessly to a multi-room physician model, improving our operational efficiency. I no longer need to send IT staff to deal with the ‘problem’ workstations. I couldn’t be happier with what Fujisoft helped deliver.” said Trevor Bunch, Chief Information Officer.